Yesterday I posted my initial thoughts on arts-based research, the topic of today’s panel discussion. Here are my brief mental notes from the morning’s event–they are a mixed bag since I wasn’t taking notes.
END_OF_DOCUMENT_TOKEN_TO_BE_REPLACED 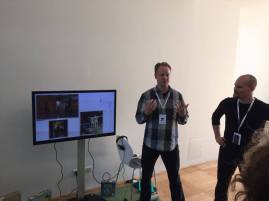 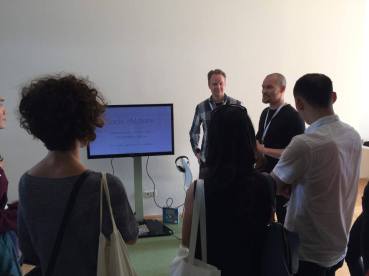 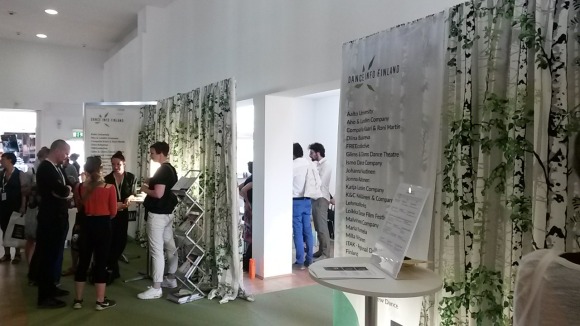 Last week the Social eMotions project and especially the dance piece was promoted at Tanzmesse 2016, the largest dance trade show in Europe.  END_OF_DOCUMENT_TOKEN_TO_BE_REPLACED

Our Social eMotions project combines science and art, also in that the outcomes are both scientific and artistic. The science part is taking shape, we are writing up a paper on the kinematic analysis, as well as the perceptual experiments. At the same time, the artistic oven has been red hot, as the dance performance has been taking shape.

Our amazing dancers and musicians worked very hard during the first weeks of June to put together this ambitious and novel performance. There is choreographed movement and composed musical material, but the performance is improvised in the sense that the emotional dynamics and emotional contagion will change and mutate the materials. There is a very interesting set of interactions going on, as both dancers influence each other, as do both cellists, and of course the dancers are influenced by the music, and vice versa.

To keep things even more open, the audience will get to vote for the emotions that the performers work on. The audience gets this chance a few times during the performance, and as the full cycle will be performed twice, they can make different choices and thus experiment on emotional processes, using live dancers and musicians!

We already trialled this in an open rehearsal during the Helsinki Day, as a part of “Planet Suvilahti“. As the pic shows, there were a lot of people attending, and we got really nice feedback! Communicating the results of the online vote to performers was done in an old-fashioned way by showing the emotions on pieces of paper. By the actual performance, we’ll figure out a smoother way of doing it, hopefully integrating them to the interactive projections.

There is now also a trailer of the performance, it can be viewed below. The next public showcase of the work will be presented in Duesseldorf during the Tanzmesse on 2nd September, and the premiere will take place in Oulu on the final day of the OuDance Festival (Sunday 18th September). That performance will (weather permitting) be outdoors on the Rotuaari promenade. See you there?

It’s been a busy beginning of the year in the Social eMotions research project. We’ve been working on a number of things, so I thought it would be nice to have an update on where we are, including introductions of new members in our project team!

On the scientific side, the main theme has been perceptual experiments. We’ve been running experiments showing people animated clips such as the GIF above, and asking them to rate the dancers movements and their relationship along various scales. We are currently analysing data, and have just started to write up our movement analysis paper, so there’ll be published results soon.

On the artistic side, we are working full steam toward the première in Oulu in September. Jarkko and Johanna have been working on the movement material, and we now have also a composer and two musicians working on the music for the show! Jussi Lampela will compose music for the piece, and it will be performed live by two cellists, Iida-Vilhelmiina Laine and Ulla Lampela. We are very excited to have these stars join our team!

As the final performance starts to take shape, its key aspects are being planned and put to their places one by one. We are working on ways to let the audience influence the performance as it happens, and on ways to include the scientific results in it. For the latter purpose, we are getting help from Dr Roberto Pugliese in visualisations and projections. We visited Roberto’s studio yesterday and Jarkko took this snapshot of us dancing and Roberto’s system capturing it on Kinect and producing a live visualisation on screen.

This will (continue to) be great!

Now that we have recorded the approximately 450MB of movement data, it’s time to start processing and analysing it, and getting it ready for the next stages of the project. This, and probably the next couple of posts are about movement data: in this post I’ll explain briefly how optical motion capture works, and in the next ones what we can do with the data.   END_OF_DOCUMENT_TOKEN_TO_BE_REPLACED

The fourth international symposium on performance science (ISPS for short) convened in Vienna at the University of Music and Performing Arts. The theme for this four day meeting was “Performing together”, which of course fits my research interests perfectly. So, I gave two talks but was mainly looking forward to hearing what the “state of the art” in ensemble research and joint action, entrainment etc. is. END_OF_DOCUMENT_TOKEN_TO_BE_REPLACED